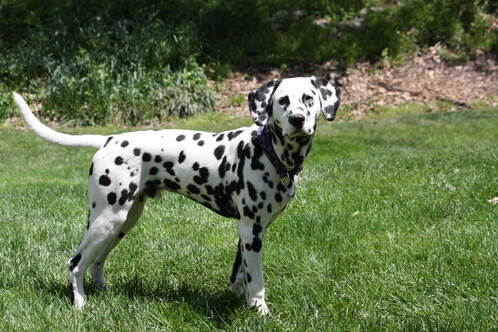 GCH Juju’s Busy Being Fabulous - “Raj”
2012-2020
Raj lived with us.  He was a handsome boy with a wonderful disposition!  He had extremely dark eyes, an exceptional front assembly, a beautiful head, good bone, nice rear angulation and a great tail set.   We loved this boy’s attitude too!  Raj finished his AKC Championship easily with four 4-point majors at two specialty weekends at just 11 months of age!  He was shown 9 times during those two weekends (Greater Denver Dalmatian Club and Greater Twin Cities Dalmatian Club) and was awarded Winners Dog or Reserve Winners Dog in 8 of those shows!  His wins included 2 Specialty WD awards, one Specialty Best of Winners, and 2 Specialty Reserve Winners Dog awards.   Raj also was awarded Best Junior in Sweepstakes at the Cumberland Valley Dalmatian Club Specialty.  And he received a Bred By Exhibitor Group 1 at the Greeley KC All Breed show.  He was a lot of fun to show and even more fun to live with!   Raj spent the summer of 2014 on the road showing as a special.  Highlights as a special include three Specialty Select Dog awards and three Specialty Award of Merits, and 13 group placements including a Group 1!  He, like his father and maternal grandparents, was honored to be among DCA’s Top Twenty Dalmatians.  Raj was among the Top Ten Dalmatians in Owner Handler competition for 2015 and 2016.
All health tests were completed for breeding and frozen semen is available.  CHIC # 100966.  Toni is the co-breeder of the one litter he sired that produced two AKC Champions - one of them our Rhani. We were heart broken to lose Raj at just 7 years of age. We don't know how, but he suffered a paralyzing injury to his lower spine and could not regain use of the rear half of his body.  We had to make the horrible decision to let him go and we will miss him always. 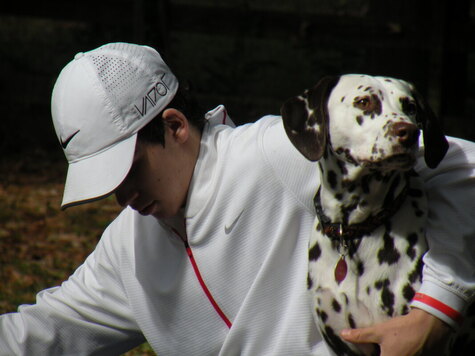 Desi is owned by Bill and Liz Brister of Jackson, MS.  Bill and Liz have two sons (both grown now) - James and Zach, another Dalmatian (Lucy) and a cat.  The family wanted Desi as a family companion but decided to show him to see if they could earn his AKC championship.  Fourteen year old Zach was Desi’s handler.  They went to just a few shows  Desi and Zach went 4th in the 6-9 Month Puppy Dog class at Nationals, Best of Breed and Non-Sporting Group 4 in Biloxi, MS, and WD/BOW for two 5 point majors during the Dalmatian Club of Atlanta regional specialty!  Desi and Zach also won a Puppy Group 1 and a Puppy Group 2 and were Reserve Winners Dog at the Cumberland Valley Dalmatian Club specialty.  Desi finished his championship with a third 3 point major by going WD/BOW/BOB at the Monroe, LA shows.    We could not be prouder of this young team and are thrilled that they decided to give it a go! 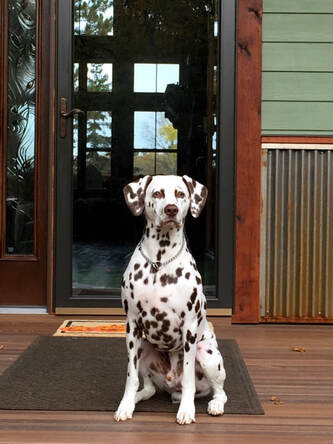 Murphy lives near Minneapolis with David and Judy Jackson and his younger half-sister named Sophie! He finished his championship easily also at 11 months old with the help of professional handlers, Dave and Sandy Slattum.  Murphy, like Raj and Desi, also was awarded a Specialty Winners Dog/Best of Winners and was also Best in Sweepstakes at the Greater Twin Cities Dalmatian Club Specialty.  He was also Reserve Winners Dog at the Western Reserve Dalmatian Club Specialty and secured a 3rd place in Sweeps at Nationals and 2nd place in the 6-9 month regular puppy class!  Murphy also has earned points toward his Grand Champion title.
​ Frozen semen is available.
Desi, Raj & Murphy - 6 Months 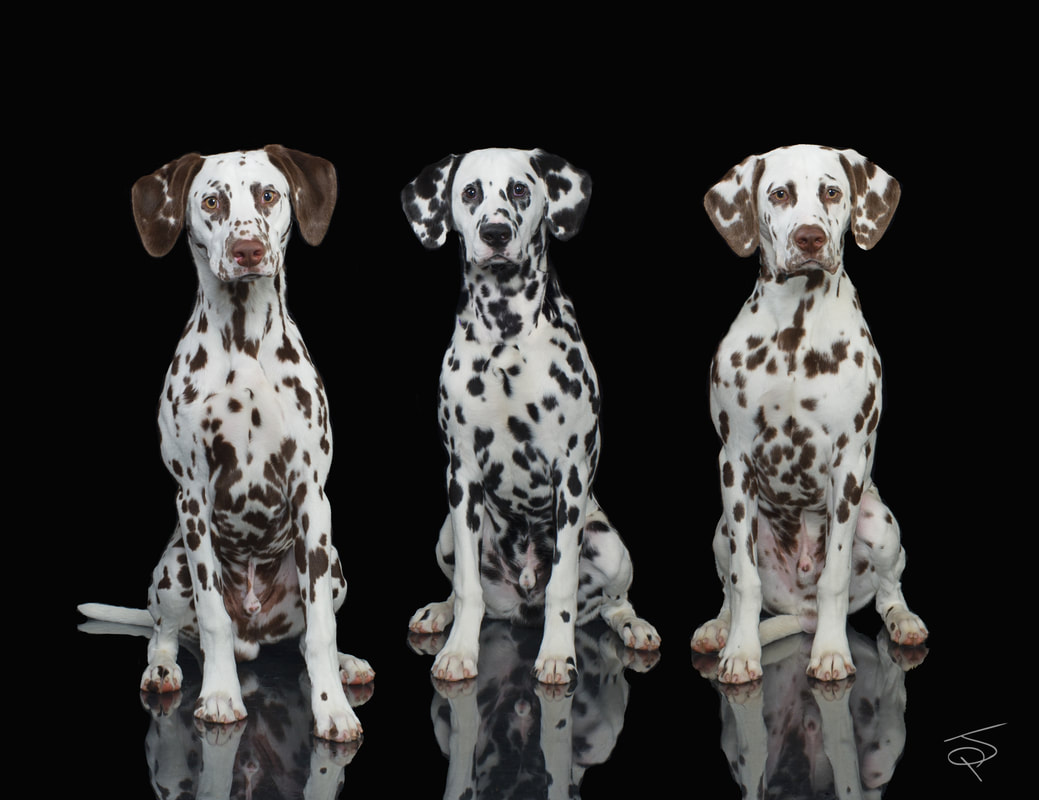 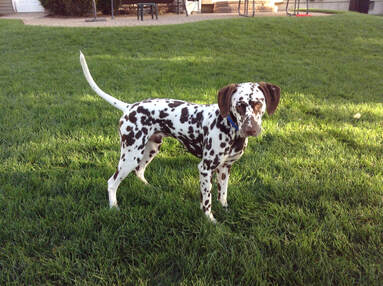 Juju’s You Are Not Alone (L) - “Yahtzee”
Yahtzee lives in Troy, MI with Brian and Paula Matheny and their 4 children.  He’s got it made with kids to play with all day long every day and is doing great!   Yahtzee is a very sweet boy. 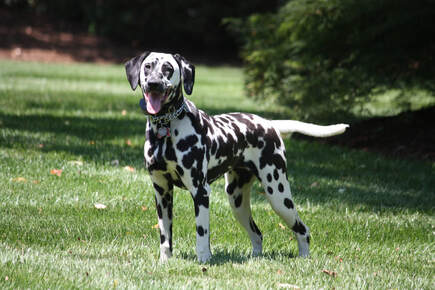 Juju’s  Best of My Love - “Lexi”
Lexi lives across the street from us with Mike and Cindy Chapman and their son - Steven.  She still gives us kisses whenever we see her!  She is a happy girl with a lot of color.  She has lovely movement and stacks herself beautifully as she stands sentry in the yard! 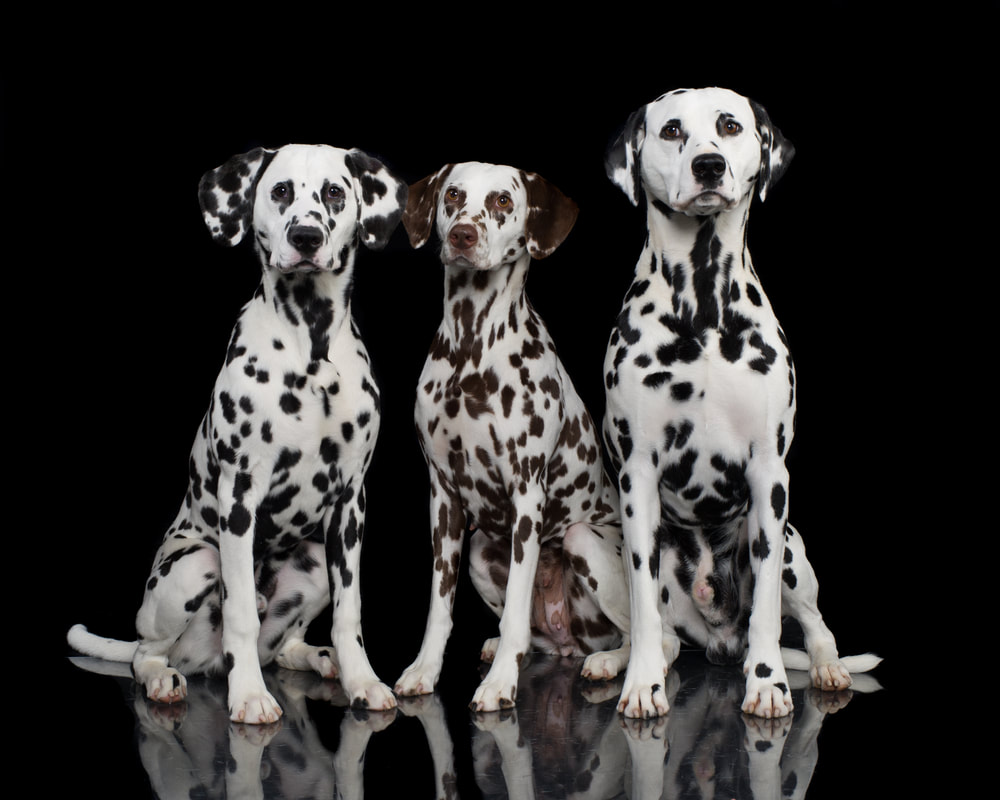