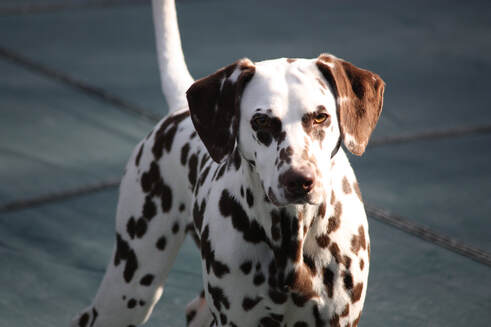 ​GCH CH Juju’s Bewitching Bailiwick (L)- “Baili”
Baili lives with us and is our first home-bred champion all from the Bred-By-Exhibitor classes at 17 months old!  Baili finished her AKC Championship with two five-point Specialty majors, one Specialty Best in Sweeps, one Specialty Best of Winners and one Specialty Best of Opposite.  She was awarded class placements at the 2010 Dalmatian Club of America National Specialty in Sweepstakes and Futurity and made the cut at a very young age in the large and competitive Bred-By class.
Baili was selectively shown as a “special” by Mark Bettis in 2011.  She easily  earned her Grand Champion title, as well as a Group Second, a Best of Breed over two Best In Show Dalmatians, and multiple Specialty Selects and Awards of Merit.
She is petite at 20 1/2” tall and 42 pounds, but she is one complete package with great balance, flowing movement, a fabulous front, and she loves to show!
Baili has her CHIC number (all health clearances) and was a fabulous mom to one litter that produced 3 AKC CH including our handsome funny boy Raj who was a Bronze Grand Champion, DCA Top 20 Qualifier, NOHS Finalist two years in a row! 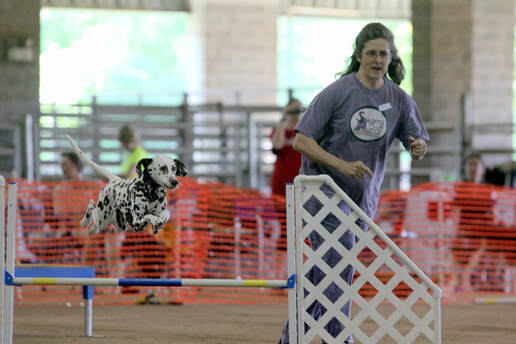 Sage lives in Murfreesboro, TN with Donna Dombourian, AKC Agility judge, and another Dalmatian named Ink.  Donna is a wonderful Agility trainer and Sage has burned up the rings as is apparent from all those AKC, USDAA and NADAC titles before and after her name.  Sage is the ONLY Dalmatian to have achieved the Championship title in all three Agility Venues!
She earned her first MACH (AKC Master Agility Champion) title on January 26, 2014.
Sage earned an invitation to the AKC Agility Invitationals in 2014 and in 2015!  Only the top five dogs per breed get to go!
All those titles also include titles in Rally, Scent Work, Fast CATS, Trick Dog, and Barn Hunt!  Thus the Versatility titles!
We applaud Donna and all the performance owner handlers in the Dalmatian community for the dedication and effort you devote to realizing the potential the Dalmatian has to offer!
We could not be prouder of this team! Sage has now retired from Agility but her new pass time is AKC Scent Work!
Sage is also on the petite side.  She is a very pretty girl with lots of spunk!  Beauty and brains! 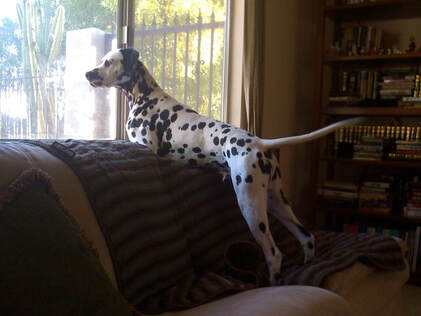 Lance lived with Bill and Charlotte Bartow in Tennessee.  He was originally owned by his sire’s owners - Tom and Sonja Jones who made Lance our second AKC CH from the Lucy x Brigham litter finishing with four majors, a Best of Breed over specials from the classes, a Specialty Best in Sweeps and a Specialty Best of Winners. Lance sadly went to the rainbow bridge at age 9 due to complications for urinary tract infections.
Lance had an exceptional temperament and was a beautiful, fun-loving boy.  He was just under 23” tall and was well-proportioned with a  lovely head.  He had all his health clearances and his OFA CHIC #.  Frozen semen is available for Lance. 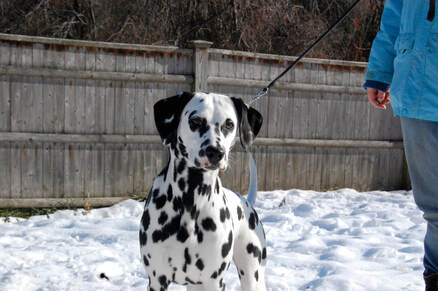 CH Juju Filigree Turquoise Telkari
“Kari”
Kari lives with Dr. James and Christine Becker near Boston, MA.  Kari is Lucy’s fourth AKC Champion.  Handled by Rick Krieger, she went Best of Breed from the classes for a four-point major along the way to her championship.
Kari, like Baili and Sage, is a petite girl and is very pretty. 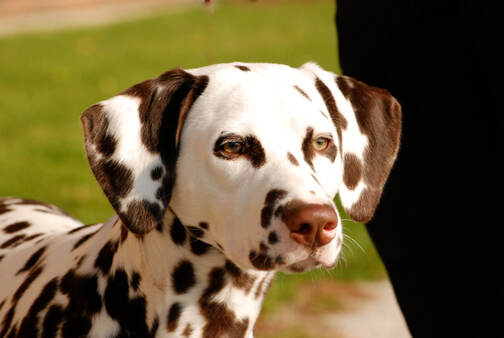 Juju’s  Premonition Dream Come True (L)- “Dolce”
Dolce lives near Chicago, IL with Jorene Pierzga and “Teddy” another Dalmatian girl just about Dolce’s age from Dakota Dalmatians. Dorene's best friends include Jorene's adult daughter, Jaime and her grandson, Anthony.   She is a beautiful girl with a very sweet disposition.  Dolce, the smallest puppy as a baby, grew up to be in the 21-22” height range. 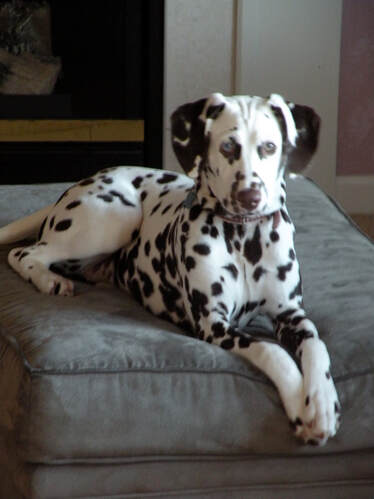 Juju’s  Charm of Shelbyville (L) - “Shelby”
Shelby, our special bilateral deaf girl, lives in Rochester, NY with Mary and Vern Gregg, their four kids - Monica, Rebecca, Josh and Kaitlyn, and a foster "fail" - Piper!  The Gregg’s routinely foster cats and dogs, so Shelby has a constant stream of new visitors.  What a life for a pretty girl full of fun and energy! Shelby is also in the 22” height range and has stunning conformation to the standard.  We feel very blessed that the Gregg’s found us and Shelby! 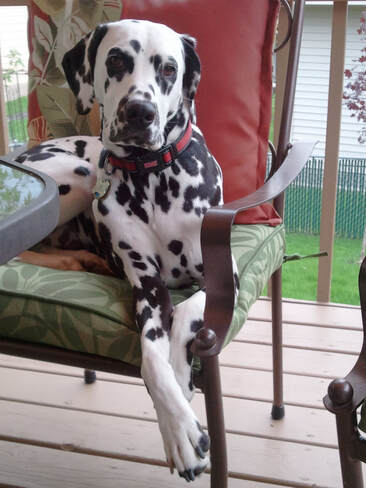 Juju’s Magical Charm Dashell Saxon - “Dash”
2009-2016
Dash lived with Chris, Karnette and Jordan Carmon  in the Chicago area.  He sadly passed away one week before his 7th birthday.  Dash was also a substantial boy at 23” with a fantastic front and a good temperament.  He was a handsome and fun-loving clown of a dog who made his family laugh every day.  It is hard to imagine a dog more loved and missed.

We are so fortunate to have such wonderful homes for all of the Brigham x Lucy kids!  And we are very proud of all of them!
​